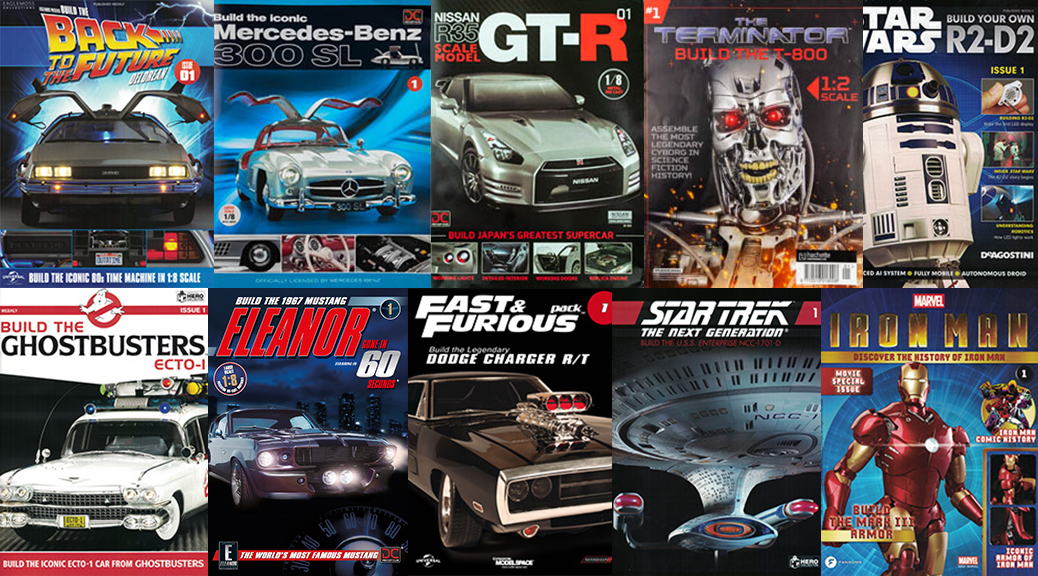 “A partwork is a written publication released as a series of planned magazine-like issues over a period of time. Issues are typically released on a weekly, fortnightly or monthly basis, and often a completed set is designed to form a reference work on a particular topic.” – Wikipedia

Partworks have been around since at least the 1700s, originally consisting of pieces of a large book that was bought weekly for pennies until the complete book was collected and then bound together. Hence, people bought ‘part’ of a ‘work’. The modern ‘partworks’ on my sites refer to the printed magazines we collect over the course of assembling these large-scale models. Technically, what we are doing here are partwork “build ups”. Notably, partworks do not always have to include model parts. Other partworks may contain, for example, a piece of an art supply set, a DVD, or a collectible with each issue, such as the Eaglemoss Star Trek Starship Collection.

Publishers of these build ups, such as Eaglemoss, DeAgostini, and Hachette, spend a year or more creating, editing, and printing these partwork issues, then typically release them weekly or monthly in a marketable area of interest. To entice customers to collect the entire set, they started to include a few pieces of a model that can slowly be assembled. When the entire set is collected, the model can be completed. That is why it can take over two years to complete these builds.

Many people get confused about these partwork model build-ups. Typically, we are not actually buying the model itself, but the collection of magazines. The model is the extra bonus to keep us going. In the end, they sell us dozens of issues and we get to not only enjoy the magazine content, but assemble an interesting model along the way.

Just as time moves on, our build up partworks are changing too. Now, we can build these large-scale models without the printed magazine content at all, such as the US version of the DeAgostini Dodge Charger R/T, anything that the newcomer Agora Models sells, and more. Unfortunately, the price of these ‘digital delivery’ versions is still as high as the printed ones.

I personally enjoy the large-scale modeling and love to be able to assist other builders along the way. My small family of sites is all about sharing information, tips, tricks, and general modeling processes to make the most of these expensive ventures. I hope they are able to help you and make the most of your experiences building partworks!