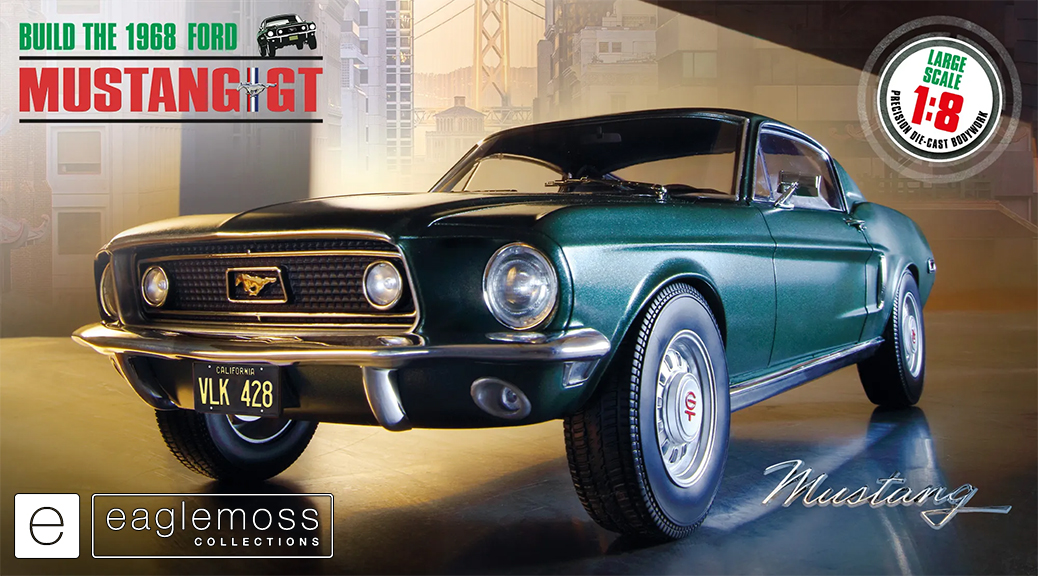 Eaglemoss/Die-Cast Club have quietly released a new subscription partwork to build up a 1968 Ford Mustang GT!

This 1:8 scale model may look familiar to car nuts like myself – this is the same model and Highland Green color of the Mustang that Frank Bullitt (played by Steve McQueen) drove through the streets of San Francisco in the one of, if not the greatest, car chase scene ever filmed. The 1968 film, Bullitt, is considered an classic car movie!

“There is no cooler car from the 1960s than the Ford Mustang, the original “pony car” that combined power, performance, and understated style like nothing before or since. And now, for the first time at 1:8 scale, you can build your own Highland Green 1968 Ford Mustang GT Fastback, the model that was later transformed into the legendary car involved in the greatest Hollywood car chase of all time in Bullitt.

Your superb 1:8 scale model is made from high-quality die-cast metal, along with other precision-engineered components in ABS plastic and rubber. Functioning parts include working front and rear lights, opening doors, hood, and trunk, wind-down windows, and rotating (steering) front wheels. It’s a stunning reproduction of a factory-specification 1968 Mustang GT Fastback, but what takes this sublime replica to another level is an optional customization kit that converts an already-cool Mustang into a genuinely iconic car.”

UPDATE July 2022: Before this partwork was ever released, Eaglemoss declared bankruptcy. However, it does appear that the stock version (without the Bullitt add-ons) is now being sold by Hachette in the UK.